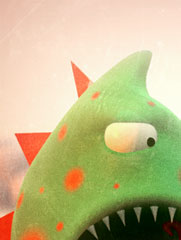 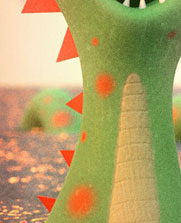 The direction that we view a light source from has a profound effect on our perception of it, and on how the objects in a scene will appear. Choosing which direction your main light is coming from is one of the most important decisions you can make since it will have a great deal of impact on how a scene will appear, and also on the emotions your image will convey.

This is where the light source is directly behind the viewer's point of view. It is most commonly seen in flash photography and is often fairly unappealing if the light source is hard - there are exceptions and in some situations very attractive images can come from soft frontal lighting.

Front lighting does little to reveal form or texture since the shadows are mostly hidden from view, as a result it can make things look flat. However soft diffused frontal lighting can also be quite flattering to some subjects for this very reason - it can help conceal wrinkles and blemishes and so is quite often used in portrait and product photography.

Front lighting can make a scene look flat since it isn't good at revealing form and texture.

Side lighting is very good for showing form and texture and lends a three-dimensional quality to objects. Shadows are prominent and contrast can be high as a result. Side lighting can be used to throw dramatic shadows onto surfaces such as walls and create atmosphere. Side lighting is generally attractive and is often used to great effect: it is the kind of lighting encountered at the beginning and end of the day and as such is often seen in films and photographs.

Potential drawbacks of using side lighting are that areas of the image can be lost in shadow, and it can reveal imperfections such as wrinkles. In portrait photography for instance it is generally used on men rather than women because it can look quite harsh, especially if the shadows aren't soft edged.

Side lighting can be used to great effect to reveal form and texture.

The texture of this wall is revealed by the light of the evening sun raking across it.

The long shadows cast across this image help to give it a sense of depth and dimension.

Back lighting is where the viewer is looking into the light source, and objects will have their lit sides facing away from us to appear either as silhouettes or darkly lit by the fill light. It is usually a high contrast situation and can often look very atmospheric and dramatic. If the light source is at a slight angle relative to our point of view objects will have a rim of light defining one or more of their edges, the harder the light the more pronounced this rim will be.

Backlit scenes usually contain a lot of shadow unless the light source is very soft. Most of the time the image will be predominantly dark with dramatic pools of light. The rim lighting that occurs in this situation can be very useful for defining forms among the shadows. Another feature of this kind of light is that it reveals transparency, translucency and any fine detail or texture along rim-lit edges. This kind of light is very effective for lending drama to an image.

Back lighting can make even the most mundane subjects look appealing.

It is also a very effective way of revealing translucency.

Silhouettes are a common feature of backlit scenes.

Top lighting is a slightly more unusual situation, although it is common in overcast daylight. It can also be encountered in sunshine at midday, in some interiors and in other situations such as stage lighting. In soft light it is an effective way of showing form. Under hard light it can lend an air of mystery by casting dramatic shadows which conceal most of the forms beneath them: for instance people directly underneath hard lights will have black holes for eyes since their eye sockets will be in total shadow.

To my knowledge top lighting is rarely used by artists, however that's not to say it shouldn't be used. For overcast daylight it is the most realistic set-up, with the whole sky acting as a large diffused light source. It's also an unusual lighting solution for more atmospheric situations and the very fact that it's not often seen can be used to create an uncomfortable feeling.

Soft light from above is a feature of overcast weather.

Lighting a figure from straight above can give a broody and menacing look. It emphasises bone structure and the depth of the eye sockets.

If lighting from directly above is rare, then doing so from directly below is even more unusual. In a natural context this might happen if someone is standing over a campfire, or holding a torch. Reflected light can also come from below, from water for instance. It would definitely lend a strange appearance to even the most familiar things since what is usually seen in light and shade would be reversed (think of a person shining a torch onto their face from below: the shadows appear to be upside down).

Lighting from below is rarely seen, but can be used to create unusual images.

Lighting a figure from below creates a spooky and unfamiliar look, even the highlights in the eyes look strange because of their placement. Notice how the angle of the light also emphasises the texture of the skin. Compare it to the image in the previous section: it is the same face, only the position of the light has been moved, yet they look completely different from each other.